Late summer is upon us at last. The next 2 months of the year is some of the best fishing of the season. Water temperatures are falling on the rivers and lakes in Northern Michigan and fishing is picking up. Over the next two months every non-migratory fish is making their final push to feed before winter and Brook and Brown trout are feeding before the spawn. Look for inland lake fly rod opportunities to increase in the next two weeks as the lake temperatures will drop below the 70 degree mark and fish will begin to slide shallow again. 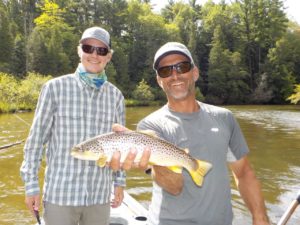 The trout fishing has picked up over the last week. Water temperatures on the rivers are fluctuating from the upper 50’s to the mid 60’s on many of the free flowing rivers. The tail\waters such as Hodenpyle and Mio are still running a bit warm for consistent streamer fishing but that should change within 30 days. Small streamers have moved volume of fish while 3 to 5 inch flies seem to consistently move the bigger fish. The bigger fish we are seeing are up to 20 inches with several in the 12 to 18 inch range coming to the fly. 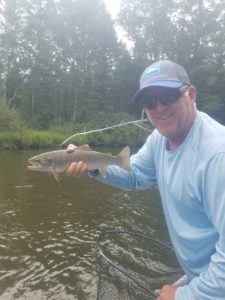 Streamer fishing in the late summer is very different than spring big water fishing. Instead of fishing the banks most fish are found in the deepest holes in the river, whether they are on the outside bend or the middle of the river. Creeks mouths with cold water are also key spots to look for regardless of depth. It’s usually best to travel with 2 rods and reels ready to go. I prefer the 24 foot Rio DC tips for unweighted flies (I, personally, never run over a 250 grain this time of year) and the Rio 4D  Big Nasty lines with weighted flies. By matching your line to the weight of your fly it will allow for proper presentations regardless of depth of water. The streamer fishing will only continue to improve over the next month. 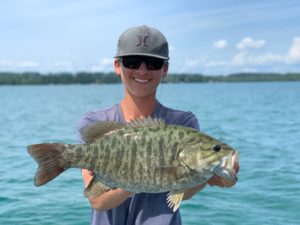 On the inland lakes we are starting to see temps around 71 on the surface and fishing has picked up considerably since the 73 to 76 degree surface temperatures. Some bass are moving shallow and some top water opportunities are beginning to arise. Once the sun is high the deep water bite has been very consistent. 20 fish days are not uncommon this time of year with a few in the 3.5 to 4.5 pound range. It’s a fun and relaxing trip on some of the most beautiful lakes in the country. As water temps fall into the mid to low 60’s, walleye will begin to show up more frequently. Look for the peak walleye bite to start in early October and only get better until it’s too cold to fish. 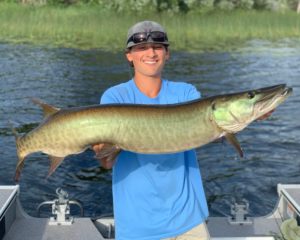 The esox bite (pike and musky) has been consistent to the extent that when conditions cooperate there are fish to be found. If the sky is high and winds are light you are better off bass fishing. By watching the weather you can find windows of opportunity with some frequency. The pike and musky fishing will get better within two weeks, from that point until mid October will be the peak bite of the fall.

My favorite approach in any of the lakes is using large lures and flies to target aggressive fish. It’s very similar to the big streamer technique in the rivers that I have used for years. The chase and/or eat is worth the day of grinding, and our average fish are considered big by many anglers. By fishing large lures you will see more than pike and musky, including some of the biggest smallmouth and largemouth bass you will see in Northern Michigan. Wire leader is critical to every bait based on the number of pike and musky, the bass do not seem to mind either. Some of the best baits we have used this year are the Gan Craft and Jackall Gantarel. They consistently show big fish. We had a few hook failures on musky early in the season as the stock hooks straightened out but that problem should be solved. Walk the dog top waters have also done some damage, especially on the big smallmouth, the September top water bite can be phenomenal. Burning large bucktails just under the surface has also been showing a good number of fish. A bass, pike or musky could be seen on any cast which keeps it interesting. This is a very exciting way to fish these lakes and is something a bit different than most people are doing.

Weekdays are empty on the water and my calendar too. Plenty of full an half day options for almost everything that swims are available for the rest of the season. Conventional gear, fly fishing trips or a mix, it’s up to you.